Nyerere National Park (formerly Selous Reserve) is Tanzania’s best kept secret. While other game reserves and national parks in Tanzania may be more well-known, Nyerere offers a true wilderness experience, with endless wildlife spotting opportunities and without the crowds. As such, it’s a popular place for locals seeking safari adventures off the beaten track.

The park covers a massive area of 44,800 square kilometres (about 17,300 square miles), making it bigger than Switzerland and the largest, most important game reserve in Africa.

Because most people fly into the Selous area there are far fewer tourists than in northern Tanzania. For example, there are only about 15 camps in the entire Selous area compared to over 50 in the much smaller area of the Serengeti. Since flying is more expensive than overland travel, the area is more exclusive, ensuring privacy for our guests.

Travelling overland is generally cheaper, especially for a group of six passengers, which is the ideal number for one safari vehicle. Bear in mind that travelling overland can be uncomfortable as the dirt roads are bumpy.

However you get here, the journey is worthwhile. Spending an extended time at our camp is recommended to reduce your travel time and allow yourself more time to relax and enjoy the experience.

The Reserve was established in 1922 and named after Frederick Selous, a British military officer, explorer and big game hunter who later became a conservationist. Selous first visited Africa at the age of 19 in 1871 when he set off to make his fortune as an elephant hunter. He went on to guide and become friends with prominent figures such as Cecil Rhodes and Theodore Roosevelt.

Later in life, as Selous realised the impact hunting was having on the African wildlife population, he became vocal about protecting the environment. His collection of over 5,000 plant and animal specimens is now housed in the Natural History Museum in London.

Selous Game Reserve became a designated UNESCO World Heritage Site in 1982 because of its undisturbed nature and rich biodiversity, including a variety of creatures with important predator/prey relationships.

The reserve includes a wide variety of different habits which support the wildlife, in particular the dominant Moimbo woodlands. Other habitats include open grasslands, riverine forests, swamps and lowland rainforests. Large areas of the reserve are flooded annually by the Rufiji River while other rivers, which are normally dry, gush with water during the rainy season.

During the dry season, which is the best time for wildlife viewing, the Rufiji River is the main water source attracting thirsty wildlife to its banks.

Located on the coastal plateau 150km (100 miles) from the Indian Ocean, Selous has a tropical, humid climate.

Nyerere National Park has no permanent habitation leaving it barely touched by human disturbance. It is further protected by a buffer zone of reserves that surround it and act as a wildlife corridor, most notably Niassa Game Reserve in Mozambique.

Selous is a protected zone with a management plan that is constantly developing to protect the integrity of the landscape and its wildlife.

Much of Selous is managed as a hunting reserve while an area in the north, close to our camp is dedicated purely for photographic safaris.

While Daigle Tours does not support hunting, UNESCO considers that, by carefully controlling hunting quotas and using the income for conservation and management, it is a sustainable practice.

Poaching is an ongoing problem throughout Africa and significant funds are needed to protect wildlife, especially elephant and black rhinoceros.

However, mining in the area around the reserve represents the worst threat to the environment but it is hoped that improved management practices will be able to curtail this.

Currently, visitor entry fees for both hunting and photographic safaris contribute to funding reserve management. This supports the local communities and helps conserve this precious environment and its wildlife.

Nyerere National Park Fees are as follows (correct at time of writing April, 2018) :

Charts below show fees and which activities they apply to: 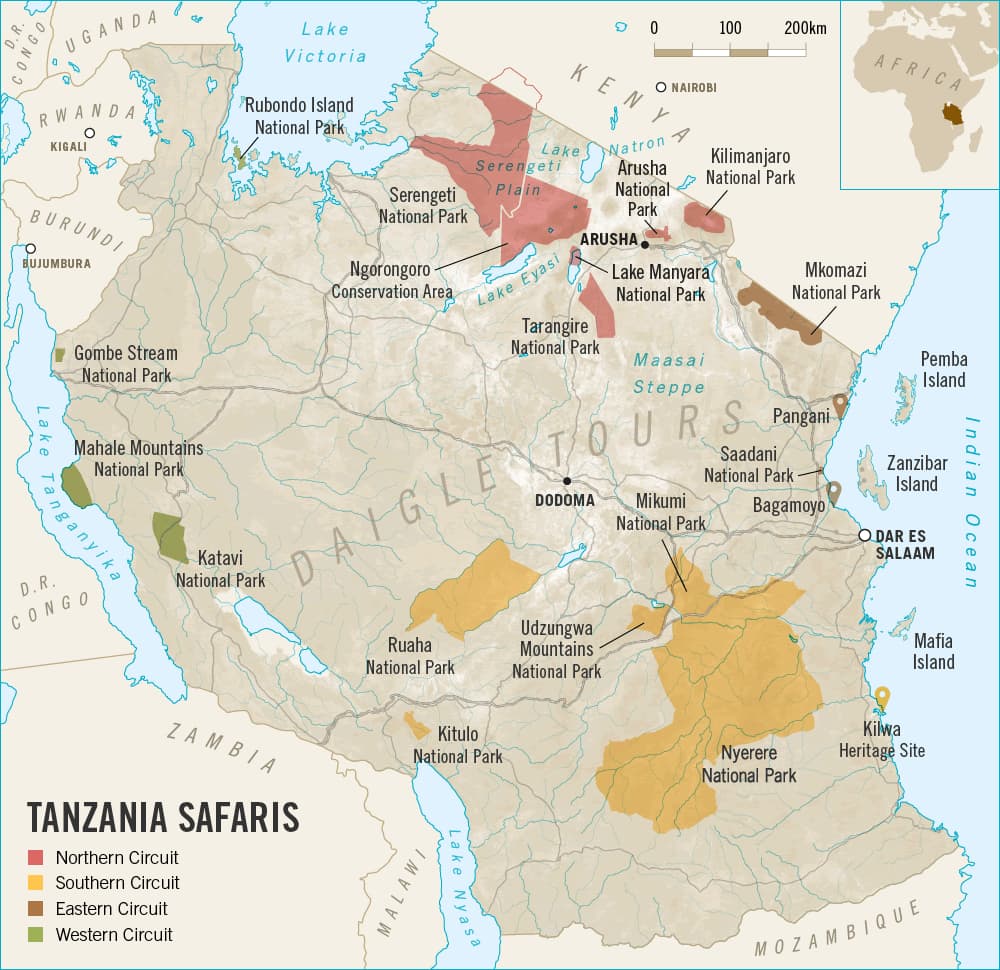